2 M.A. in Geography and Urban Planning, University of Tabriz, Iran

3 M.A. in Geography and Rural Planning, University of Zanjan, Iran

Introduction
Urban property damage or vandalism means the destruction of property. In large cities, we have witnessed deliberate destruction and anti-social behavior of some people who deliberately destroy beautiful properties and what belongs to others. This represents a failure to accept the cultural norms of society. Such behaviors have billions of dollars of loss annually to service facilities and welfare. Similar to the towns and cities of the world, it can be claimed that this phenomenon brings billions of losses in Iran. Tabriz is not also exempt from this phenomenon and the phenomenon of urban vandalism and damage to property and government, especially municipal investment and urban equipment in Tabriz.
Methodology
In the present study, we have used "Descriptive- analytical" research method and in terms of the ultimate goal it is an applied research. Many changes have been made to review the previous works of documentary method. The study is based on field studies, direct observation and questionnaires. Cochran sampling method is to estimate the sample with 95% of confidence level and error of 5%. After field studies, data collection and processing have been made to analyze the data descriptive statistics, including Mann-Whitney U test to evaluate the effects of gender on Vandalistic behavior. We have also used parametric correlation (Pearson correlation coefficient) for calculating the degree of correlation between the variables affecting the vandalistic behavior. Finally, Path Analysis has been conducted to assess the causes of vandalism in Furniture equipment. The SPSS software has been used statistical analysis.
Discussion and Results
The data have been obtained from the questionnaire related to vandalism in the city, as about 42% of participants were men and 58% women; The acts of destruction of property in urban furniture are including writing on the walls, and breaking lamps and lighting and also equipment in green space. According to the first hypothesis "Gender role is effective in destroying public property in Tabriz". The data were analyzed by Mann-Whitney U Test. According to the test results with Z value (3.33), the error level is significantly smaller than 0.05. It must be said with 0.95 confidences that there is statistically difference in vandalism on urban furniture between men and women. This result implies that H1 research confirm the assumption of difference in vandalism among men (194.08) and women (190.97) and the role of gender in urban furniture and vandalism against the rejection of H0 that assumed the difference in the vandalism among the men and women. Pearson correlation test was used to "investigate the relationship between economic and social status of citizens in the destruction of urban furniture". The correlation coefficient between the economic and social status and operation of Vandalistic issues (r = -3.394 and error level of less than 0.01) showed inverse relationship between them. In other words, the economic and social status in people behavior have something to do with the vandalism on urban furniture .
Path analysis test is used to determine the reasons for the urban vandalism. The results revealed the effects of individual and psychological factors (0.29), family factors (0.33), social factors (0.44), economic factors (0.11) and finally Terms and Conditions of location status (0.37). In this function, the R2 is (0.223). This means that 22% of respondents make changes in the trend of vandalism on urban furniture by these factors.
Conclusions
The results of the relationship between gender and vandalism in urban furniture in Tabriz show that the Vandals are generally men. The results reinforce the idea that differences between men and women related to vandalism in terms of urban furniture and Vandals are generally related to male. In this study, we have discerned social and economic factors that can affect the Vandalistic behavior. Therefore, this study is consistent with the theory of Philip. There is a relationship between the deserted streets with all kinds of vandalism, including destruction of green spaces and etc. Thus, the research results are consistent with Moser, Damer, Kazolin, Samer, Goldistin and his colleagues in this study. The deserted streets have an impact of vandalistic behavior on urban furniture directly around 0.30 percent. For some situations the kind of vandalism on urban furniture affected about 0.37 percent. The relationship between social and economic factors affected the sabotage of public property. Therefore, in this study, social factors with 0.44 percent and economic factors with 0.11 percent play an important role in the destruction of public property. Jamshidi research demonstrated that social factors affected 4 times the economic factors. As a result, the research of Effati has shown that family factors and conditions where the behavior contributed to Vandalistic actions show the role of family and place conditions 0.33 and 0.37, respectively. These factors together contributed to Vandalistic behavior in urban furniture. Vandalistic behavior is important in urban furniture destruction. The result of this research show the relationship between aggression, vandalism, aggressive and altruistic behaviors that are consistent with research results of Shakerinia that stated these behaviors are result of social factors.
The following strategies are suggested:
-          Create social and behavioral contexts and motivate stripping in destructive reactions;
-          Advertising and information through the media, strengthening civic culture, education and display of friendly relations in the urban environment;
-          Elimination of injustice and inequality in the structure of social systems;
-          Increased participation and social responsibility;
-          The establishment of public trust and confidence toward urban management activities;
-          Improving the quality of urban design, urban spaces and structures as an important element in the prevention of vandalism on urban furniture;
-          Consideration of appropriate physical form in urban constructions;
-          Improve urban living standards in all areas and urban areas, particularly in disadvantaged districts;
-          Increased surveillance and social control in public places 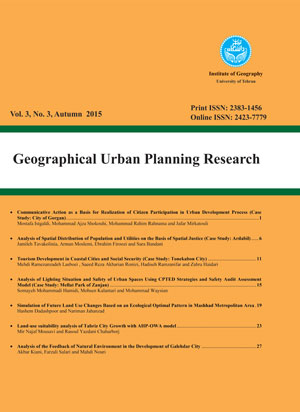